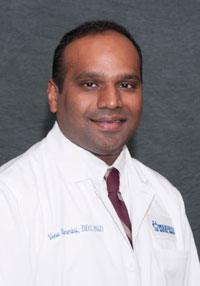 Originally from India, Dr. Chimmiri came to the U.S. in 2000 to study dentistry, and in 2004 he graduated from New York University with his D.D.S. He joined our Meriden team in 2014 with seven years as a Connecticut dentist already behind him. He is a fellow with the Master of the Academy of General Dentistry (MAGD) and the International Congress of Oral Implantologists (ICOI). He’s also a member of the:

In 2014, Dr. Chimmiri was chosen as one of the state’s top dentists by Connecticut Magazine. He is experienced in providing care with Invisalign, oral conscious sedation, general dentistry, and he is committed to helping patients in need by showing them how comfortable 21st century care can be. He loves seeing new and returning patients and talking to them about their latest travels or sports.

Dr. Chimmiri’s interests include traveling, visiting national parks, and listening to NPR. He’s been married since 2004, and together, he and his wife have a young son who keeps them on their toes every day.